The Journey to Meridian is a Mission in Mass Effect Andromeda. Missions advance the main story, and flesh out the side content of the game as well as provide opportunities for rewards and exploration.

The Journey to Meridian Information

Although most of the Nexus Leaders don't agree with the plan in going after Meridian, other pathfinders trust Ryder and begin to make plans for a Meridian operation without the Initiative leaders.

Your sibling awakens from cryostasis, the reaction of his/her depends on whether you checked on your sibling during the mission “Ryder Family Secrets”

Using vidcon station to address the crew. Then fly to Meridian in Civki system.

A console east of your landing position can activate bridge ahead.

Moveing forward, interface with another console to trigger a cutscene featuring a view overlooking the colossal Remnant city.

Two prominent towers in the city need to be investigated, one is at the north end and the other one is to the south.

Descend to the city's ground level. On the west side of the room there is a strange Remannt artifact you can scan for some Research Data.

Push through kett resistance to the east. Interface with both Remnant consoles, north and south.

Follow the platforms heading north and east until you reach a Scourge-devastated area with a broken platform you can jump down from. Heading east from here, then north. Beware of the enemies in this region.

Activate the bridge to connect the north and south halves of the level. Activating both tower controls can disable the barrier.

Make your way back, defeat all hostiles, interface with the Remnant console behind the turret to open the large door to the north tower.

Here you can find some scannable objects provide you Research Data. Climb up and interface with the console marked with the mission navpoint. You need to use your scanner to find the correct order of interfacing with the four outer consoles.

Interface with the large console  to turn on the city's flight control systems. Be careful of incomming hostiles.

Defeat the Remnant Destroyer.  It has several modes of attack, each suited to a certain range. Dont stay in one place for too long since It's equipped with explosives. Target Destroyer's turrets first to limit it's offensive capabilities.

Exit from south, interface the console to extend a bridge, and use jump-jet to get across. (A hidden container inside the ferrofluid here)

Forward to south tower, (some Research Data you can earn here underneath the walkway.) then get to Core 17: Central.

Just to the south of Core 17: Central is an encounter with several kett and Remnant. Continue east,  there's a “secret” room you can access by jumping down into an outcropping underneath the main platform.  Beneath is the hidden room, locked by a Remnant Decryption Puzzle that you cannot override with a Remnant Decryption Key. There is a strange pod inside for bonus XP, and two rare Remnant containers. 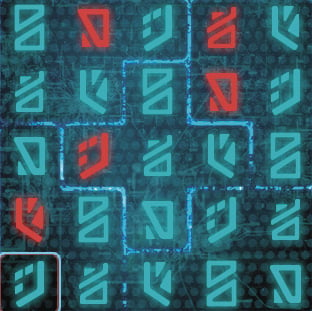 Open the door south to the research centerand defeat the enemies inside. You can interface with the turret using the console on the ledge to the east.  Or interface shield console on the opposite platform that toggles damage barriers near the south door.

Interface with the Remnant console for a cutscene. The truth about the angara is revealed.

Destory two patrolling Observers after cut scene, then interface Remnant console on a high ledge to the west.

Through the large door to the east, there are several scannable objects in this area, long with many kett.

Return to the center of the city, to Core 17: Central, once you've visited both towers. There will be a kett assault force awaiting you.

Head east into the Remnant structure. Let the Remnant fight these kett. (or you can fight them alone if you want)

Wipe out rest of hostiles, then continue east, search nearby containers and exit to the far-east Gravity Well room. Activate the well to ascend the Remnant city's command hub.

Look for the hidden Adaptive Remnant Core Device beneath the console platform. Scan it, then activate the console for a cutscene where you activate the Remnant city's defenses to fend off the kett invasion fleet. A boss encounter soon follows.

After finally defeating the Archon's Sword, a cutscene plays out, concluding “The Journey to Meridian” and launching the final mission, Meridian - The Way Home.